THE ALTAR IN THE OLD CHURCH 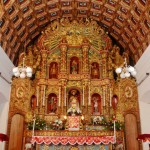 The altar in the old church was built in 1853 when Kattakayam Ousep Malpan was the Vicar. It is a very impressive structure with intricate carvings and numerous statuettes; this gold-plated wonder is now considered a heritage edifice and is visited by many tourists.

The first gold cross in our region, made under the instruction of Kattakkayam Ouseph Malpan, was that of our church.

CONSTRUCTION OF A SMALL CHURCH

The cornerstone for a church at the eastern side of the old church was laid on 13th October 1818. On account of the increasing faith in the Magi, the three wise Kings, the church was named after them. It is believed that Ousep Malpan made a ‘Mala’, a special mountain like structure, for the procession, and later the Malpan renovated it himself. The church at the eastern side was demolished in 1977 for the construction of the present Cathedral Church.

A majestic pulpit in the old church, made of a single piece of wood that was found afloat in the Meenachil river during a flood, was also the handwork of Ousep Malpan. 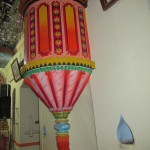 In the year 1923, with the permission of Kodungalloor Arch Bishop, Kattakayath Ousep Malpan established a Seminary attached to the old church. In 1827 the Seminary was shifted to a new building on the north side of the church. Later this seminary was discontinued and its buildings were used as the Vicar’s residence. With the passing of time that building too was demolished.

VADYAPPURAKAL (BUILDING FOR THE BAND SET)

There were two small but attractive buildings made of wood, opposite each other, in front of the old church. They were meant for the band set during the festivals, for catechism classes, etc.

In 1869 a huge cross, made of stone, was erected in front of the steps of the old church. It is to be remembered with pride and gratitude that in those days the lamps around this cross were kept alight by the Kadavupuzha Hindu family, using oil at their own expense. In 1957 the cross crashed down from its pedestal. It was then shifted and re-erected in the quadrangle in front of the main steps of the Cathedral Church.

In the earlier days the dead bodies were interred in the church itself. With the increase of the parishners the need of a churchyard was felt urgent. Accordingly in 1869 a cemetery was built at the western side of the of the old stone cross. As the years went by and the parish expanded, the church required a still bigger burial place. Thus came into existence the present cemetery, a beautiful, calm and final resting place, by the church-road side, which every one can look on and meditate on earthly mortality and heavenly eternity.

THE BELLS AND THE BELL TOWER

In 1954 the late Sri. Joseph Augusthy Kayyalakakam brought five gigantic musical bells from Ireland. They were installed on a special tower in the western side of the old church.

As a jubilee memorial of the declaration of the Blessed Virgin Mary’s Immaculate Conception, a small chapel was constructed in the centre of Pala town in 1904. This was replaced by the magnificent new chapel with its lofty tower made of 14,444 chistelled stone slabs, atop which stands the single-stone statue of Jesus Christ watching over Pala Town. His Excellency the Bishop Mar Sebastian Vayalil consecrated the chapel on December 7, 1977. In recent years, its administration is jointly carried out by the Pala, Lalam and Puthanpally parishes.

There are a number of Religious Houses under St.Thomas church, Pala. One of them is the Franciscan Third Order. Its members strive to lead an exemplary life and to promote Christian literature and care of the sick.

Rev. Fr. Augustine Chilampikunnel, our parishner founded the Mary Immaculate Missionary Institute in 1940, very near the church with a view to instill a deep sense of Christian fraternity in its members.

ST.THOMAS CHURCH IN THE FIELD OF EDUCATION

In 1896 a small English medium school had its inception at the premises of our church. Later it was shifted to the northern side of the Meenachil River and it became St.Thomas High School, the pride of Pala. Similarly the illustrious St. Thomas College, Pala is also the brain child of the visionaries of the parish.

St. Thomas B.Ed. College and the Teachers’ Training Institute attached to the church are the other well known educational institutions under this parish.

True to the spirit of its founder, the members of St. Vincent de Paul Society render their whole-hearted service by visiting the sick and providing them medical care, building houses for the poor, distributing scholarships and other material help for the deserving children.

ii. Franciscan Third Order: In 1875 a branch of the Franciscan 3rd Order started in our church. The members lead an exemplary life and promote Christian faith in addition to caring the sick.

iii. Legion of Mary : Rev. Fr. Augustine Chilampikunnel founded the Legion Presidium on August 15, 1942. In this prayer group there are men, women and children who pray together, visit families and hospitals.

iv. Pithruvedi (Fathers’ Forum) : Started in 2000, for the fathers in the families, the forum has members from more than 50% of the parish families. They concentrate their attention in solving problems related to social, health and education of the people in and around the parish.

v. Mathrujyothi (Mothers’ Light) : A unit of the official Diocesan Mothers’ Forum started here in 1994. The members of the forum strive to inculcate the real sense of motherhood among the women. Their moto is ‘for love and life’.

vi. Kerala Catholic Youth Movement (KCYM) : With a view to instill a sense of dedication for the welfare of the youth and the church, Rev. Fr. James Kattackal and Rev. Fr. Mathew Puthiyidom founded a unit of the KCYM on August 22, 2000. The members of the unit conduct seminars, camps, pilgrimages, Quiz competitions, besides actively participating in the church festivals and programmes.

vii. Little Flower Mission League : All the Christian School children from Std. IV to Std. XII are members of the Mission League. The members contribute their mite for the Missions, collect money and materials, visit families in groups, etc. Quite a number of the members have accepted religious vocation as well.

viii. Marian Sodality : In order to propagate the devotion to the Blessed Virgin Mary, Fr. John Lenis started the Sodality in 1563 in Belgium. The Jesuit fathers introduced it to India in 1607. More than 50 boys and girls of our parish are its active and devout members. For the sake of the Mother Church, they pray, study and work, thereby they develop a sense of motivation, piety and other virtues.